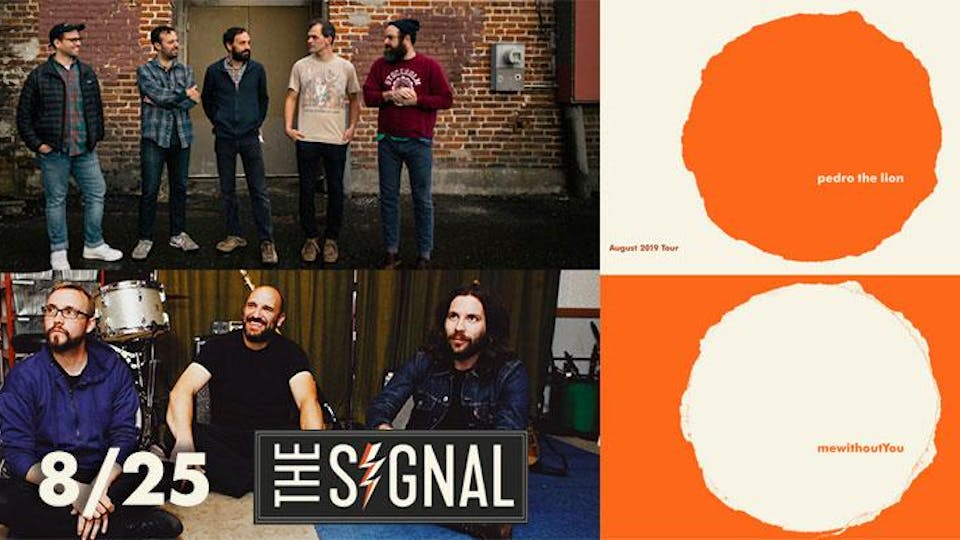 iCal
Google
Pedro The Lion / mewithoutYOU LIVE at The Signal

Pedro the Lion has always been David Bazan, but it took a long time to get back there.

In August 2016, during what he now recognizes as his lowest point, Bazan was touring the country alone in an aging minivan and found himself in his hometown of Phoenix, AZ. In need of a break from the road, he spent a night off at his grandparents' house instead of driving on to San Diego. Before leaving town the next morning, after realizing that even the most familiar places can become unrecognizable, Bazan gave himself the gift of a quick detour past the house he grew up in, and on the way, experienced a breakthrough -- one that would lead him both forward and back to another home he had built many years before.

From the beginning, Pedro the Lion didn't work like the bands Bazan had played drums in, where each player came up with their own parts. Instead, like scripting scenes of dialogue for actors to play with, Bazan recorded and arranged all of the skeletal accompaniments for his obsessively introspective lyrics and spare melodies. Each player would then learn their parts and, together as a band, they brought the skeleton to life. While bandmates played on a few recordings, Bazan often played all or most of the instruments himself.

"I found so much joy working this way," Bazan remembers. "It came naturally and yielded a feeling and a sound that couldn't have existed by any other process. At the same time, I was also aware that not everyone wanted to play in a band where the singer wrote all the parts and might perform them on the record. Someone even suggested it might not be a valid approach to having a band in the first place. Being insecure and wanting to find camaraderie, I became conflicted about my natural process."

By 2002, after recording Control, the high rate of turnover in the band finally caused Bazan to ditch his "natural process" in favor of a collaborative writing process. When, after a couple more years, this move did nothing to stabilize turnover, Bazan was perplexed. In November 2005, Bazan decided to stop doing Pedro the Lion altogether.

Ironically, Bazan didn't see "going solo" as a chance to revert back to his original process of writing and playing all the parts. For the next decade Pedro the Lion felt off limits, even forgotten, like a childhood home Bazan had moved out of. He pushed forward with releasing solo albums & relentless touring in living rooms and clubs, through every part of the US and beyond, sometimes with a band, but mostly on his own. It took a toll on his family and more acutely on himself. By the summer of 2016, he still hadn't found the personal clarity or the steady collaboration he'd been seeking and was at the end of his rope.

"I had abandoned my natural way of working in the hopes of creating space for a consistent band to write with...and it hadn't worked. So I got a rehearsal space, mic'd up drums, bass, and guitar, and really leaned into my original process again. It immediately felt like like home. Before long I realized it also felt like Pedro the Lion."

In June 2018, with Bazan on bass, vocals, and arrangement writing, Erik Walters on guitar and backing vocals, and Sean Lane on drums, Pedro the Lion went into Studio X and Hall of Justice with producer Andy Park to create Phoenix , the first new Pedro album in 15 years.

The songs themselves are the result of mining your past for who you are now. On opening track "Yellow Bike," Bazan encapsulates a core ache he's been exploring since 1998's It's Hard to Find a Friend with the line:

For someone to ride with

Phoenix also deals with having to be better to yourself in order to be better to others on "Quietest Friend," and harkens back to Control' s "Priests and Paramedics" with a story about EMTs facing a gruesome scene, and storytelling as coping mechanism, on "Black Canyon." It bears witness to both what was around and what was inside, with the signature kindness and forgiveness that lightens Pedro the Lion's darkest notes.

The result is a twisting, darkly hopeful introspection into home and what it means to go back, if you ever can. It is rock and roll wrapped in tissue paper, its hard edges made barely soft. Every melody is careful, a delicate upswing buoyed by guitar lines that hold each tender feeling together like string before ripping them apart to see what's inside. It is an ode to the place he still loves despite how alien it can appear to him now. It is the story of a life from the beginning, but not a linear one. This life is a circle, and Phoenix goes back to that first point, to show that when we are looking for home we'll eventually run into it again, whether it's in the desert, in a rehearsal space, or on a stage.

Since their formation in 2001, mewithoutYou have become a standard-bearer for their genre. Across six full-length albums and a handful of EPs, the Philadelphia band— alternately labeled experimental punk, post-hardcore, indie rock, etc.—have long put a premium on progression, never anchoring themselves to a single sound and instead gracefully wandering across stylistic lines. It’s that same spirit that informed the band’s upcoming seventh album [Untitled], their second for Run For Cover Records, as well as its accompanying EP [untitled].